This case study is of a 67 year old man who was suffering with neck pain, arm numbness, and a frozen shoulder (adhesive capsulitis).  The neck pain and right arm numbness had been there for 2 years and the left shoulder had been frozen for 20 years.  This Chiropractic patient regained full shoulder motion and had almost no neck pain in one month of Chiropractic care!

Imagine if he had received Chiropractic care earlier?

Imagine what his life would be like if he wasn’t suffering for 20 years? 2 years? 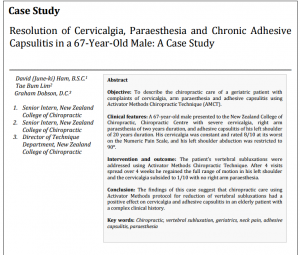 It is great to see these case studies in the new research as it highlights a real patients experience and impact on their life.  I frequently see patients in Mississauga with frozen shoulder, neck pain, and arm numbness respond well to Activator Methods Chiropractic care.  The nice thing with these case studies is that you can share the patient encounter with the World.  This particular study in the Annals of Vertebral Subluxation Research happened in New Zealand at the New Zealand College of Chiropractic, and I am sharing it with my Chiropractic patients in Mississauga – Amazing.

What Chiropractic Technique was used in this research study?

Here is another research case study on a patient suffering with a frozen shoulder who recovered following Chiropractic care.  Following the link are some highlights of the clinical presentation of the patient as well as a summary of the conclusion.

“A 68-year-old male presented to the chiropractic clinic with a
chief complaint of left sided shoulder pain and stiffness. The
patient was previously diagnosed with frozen shoulder by his
medical doctor after noticing a decreased range of motion and
progressing pain but wanted to have the condition treated
conservatively prior to any surgical procedures. The pain
originally started 20 years prior to presentation to the clinic
following two falls off his road bicycle. One fall resulted in
the patient landing on his upper back, while the second
resulted in the left shoulder being driven into the side of a car
in the process of the fall.”

“The patient reported increased aching of the shoulder over the
last three years on long bicycle rides but had not ridden since
the stiffness started four months prior to presentation to the
clinic. The pain and stiffness had been rapidly progressive in
nature. The patient first noticed the stiffness when he could
not put on his shirt without assistance from his wife. When
asked about the location of his pain the patient pointed to the
left upper trapezium, left lower cervical region, and left
posterior glenohumeral joint.”

“This case illustrates the effectiveness of chiropractic care in
improving range of motion and decreasing pain in a patient
with frozen shoulder.”

What Chiropractic technique was used in this research study on frozen shoulder?

The technique used was a combination between Activator Methods Chiropractic Technique, mechanical traction, laser therapy, and kinesiotaping.  As mentioned above, Dr. Callum Peever utilizes the Activator Method of adjusting.  The mechanical traction and kinesiotaping are implemented depending on the patient’s presentation and functioning.  The low level laser therapy in this case study was performed in collaboration with another local health professional within the same office.  At our Mississauga office we don’t have low level laser therapy on site but to collaborate with the physiotherapy team next door to our office.

I hope this information makes you curious to learn more! Definitely discuss this with Dr. Peever here or in person.  Contact us.

A 2020 Case Study on Improvement in Adhesive Capsulitis

This is a 2020 case study on improvements in frozen shoulder or adhesive capsulitis in a 69 year old lady.  Not surprisingly, “her condition was affecting her quality of life and independence as she was finding it increasingly difficult to drive.”  It is always great to see these patients recover as frozen shoulder greatly affects a person’s quality of life.  “The patient reported a renewed ability and enthusiasm to perform activities such as writing in her daily journal, doing arts and crafts, getting in and out of the pool more confidently and being able to reach behind her for the first time since fracturing her humeral head. The patient also reported subjective improvements in energy levels, sleep, emotional wellbeing and alertness following the course of care.”  Read the study and be curious if Chiropractic could be helpful in your life.

Improvement in Adhesive Capsulitis in a 69-Year-Old Female Undergoing Chiropractic Care for the Reduction of Vertebral Subluxation: A Case Study

Clinical Features: A 69-year-old female presented for chiropractic care with complete reduction in shoulder range of motion following a slow recovery from a humeral head fracture. In addition to shoulder pain, she was also experiencing significant cervical spine restriction.

Intervention and Outcome: After chiropractic care using both upper cervical specific and diversified techniques, the patient showed significant increase in all ranges of shoulder and cervical spine motion and decreased pain levels.

Conclusion: Improved outcomes in this geriatric patient could be associated with the correction of vertebral subluxation through chiropractic care.”

What Chiropractic Techniques were used in this particular case?

The adjusting technique used in this study was a combination between diversified technique, an upper cervical technique, as well as utilizing an Activator adjusting instrument.  Here is an excerpt from the research study:

“Over the course of six months, the patient was compliant to
the recommended schedule of each of the four phases of care.
After each phase, a progress examination was performed in
order to track her response to care. She was seen a total of 38
times. Upper Cervical Specific technique was chosen for the
initial care plan of twice a week for three weeks. A progress
examination was performed on visit six and Diversified
technique was added using Activator as a force applicator,
with full spine subluxation patterns being addressed and
adjusted as needed.
The patient continued to improve in both cervical and shoulder
range of motion. After a second progress examination both the
technique and frequency were continued for a total of 19
visits. As subluxation indicators decreased in the upper
cervical spine, Diversified with Activator TM application
became the primary technique for the fourth phase of 13 visits.”

Back
GET A QUOTE