Review of: Resolution of breastfeeding and latching difficulty following subluxation based chiropractic care 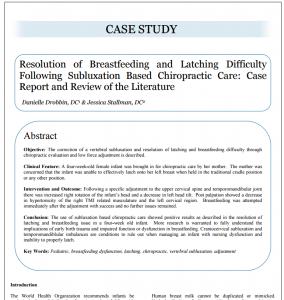 The case that this article describes about a four week old baby girl who was unable to effectively latch follows closely to my personal experiences at home and in practice.  Breastfeeding is much more difficult that my wife and I had realized.  Fortunately my daughter continuously improved her instinctual skill of feeding, although it did take effort.  While my wife committed to practice the teamwork required between mother and daughter, I regularly checked my daughter’s neck and jaw.  After adjusting any subluxated segments in my daughter’s neck she continuously had more success at latching and breastfeeding.  This made it much easier on our little girl to thrive! In my Chiropractic practice I see the same thing in the infants that I care for.

A subluxation in the neck can impede the ability of “a newborn infant [to use] half of its cranial nerves, twenty two bones connecting at thirty four sutures; and sixty voluntary and involuntary muscles to suck, swallow and breathe in a coordinated activity [while breastfeeding].”  The ease of a specific Chiropractic adjustment to help a baby latch on and breastfeed should make it a first choice when having difficulty breastfeeding.  However, I have heard of more and more babies having their tongues “clipped” in order to help them feed.

Being tongue-tied (ankyloglossia) was routinely addressed right away before any functional problems were observed. Now it is done much less and only if there are difficulties with feeding.  This is discussed in Dr Luisa Dillner’s health dilemma: should you cut your baby’s tongue-tie?  A frenulotomy may address the tongue-tie, but not all babies who are tongue-tied have difficulty feeding… If you want to avoid or postpone clipping the tongue (or a frenulotomy), perhaps a chiropractic check-up is in order first!?

Try Chiropractic first and improve your baby’s instinctual ability to latch on and breastfeed.

Review of: Resolution of Breastfeeding Difficulties and Plagiocephaly in an Infant Undergoing Chiropractic Care

This is another Chiropractic research paper that describes the case of an infant who was having difficulty breastfeeding as well as with his skull shape.  The paper is from April 2016 and published in the Journal of Pediatric, Maternal, and Family Health.  This young infant thrived during his Chiropractic care!  Read the highlighted points below and access the article from the link below:

“This case report describes the chiropractic care of an infant presenting for care with breastfeeding difficulties and Plagiocephaly.”

“Breastfeeding difficulties in the newborn can have dire consequences. Beyond the obvious need for sustenance, studies indicate that breastfed infants have fewer ear and respiratory tract infections, diarrheal illnesses, and atopic skin disorders. In addition, breastfeeding can lead to increased mother-infant bonding and an overall decrease in infant morbidity and hospitalization rates. Mothers benefit by faster return to pre-pregnancy weights. Despite these known advantages for breastfeeding, there are both maternal as well as infant factors that can lead to breastfeeding difficulties.”

Differences in morbidity between breast-fed and formula-fed infants

“A 2-week old male presented for chiropractic consultation and possible care at a chiropractic clinical training centre with a chief complaint of difficulties latching to breastfeed.”

“Postural examination revealed the patient’s head to be rotated to the right in a fixed position. Palpation revealed subluxations at the C1, the T4 and T11 vertebral levels as well as at the S1.”

“The patient responded well to care following his first set of adjustments and with noticeable improvement with his latching difficulties.”

Another blog you may be intersted in is one by our Mississauga Naturopath Dr. Kirsten Almon.  She shared a video highlighting how vaginal birth and breastfeeding influence our immune system and our metabolism for life! Check it out here.